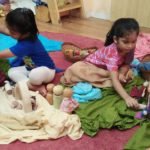 “Play Is the Highest Form of Research.”

How did you spend your time as a child? In play, of course! Do you remember running around in your compound/neighbourhood or garden chasing your friends, climbing a tree, playing all sorts of games depending on your group’s interest on that day? What feelings do these playful memories evoke?

Unstructured Play or ‘free play’ is the most important component of childhood, and it is very crucial in laying the foundation for a healthy development of a child – physically, emotionally, mentally, and even spiritually. Free play allows the child to explore, discover, create in a healthy environment that nurtures the entire being of the child.

Play is a medium through which a child digests his experiences, connects with the world around him, it is an outlet for creative expression and imagination. It helps them to weave together all the elements of life as they experience it.

The Benefits of Unstructured Play

“The ability to play is one of the principal criteria of mental health.”

Creative play is an innate ability of every child. A 2-year-old imitating his mother – happily playing with pots, pans, spoons and dishes, pretending to serve imaginary food or stirring an empty pan to make soup. A child holding a spoon to his ear, pretending to talk on the phone (like adults do).

This ability to transform a simple object into a play prop, is what gets nurtured when a child is allowed to play in a healthy environment without adult interference. An object captures their imagination and completely transforms into what is needed. The child’s play is always in the process of becoming something else.

During nature walks, sticks, stones, shells, seed pods and whatever else can be found in the natural environment become toys.

An older child (6 or 7-year-old) often engage in role-play with other children or adults. Dolls facilitate this process of role-playing, pretend play – where dolls become mother, father, sister or brother, friend and a handful of chairs, some cloths becomes his house. A lot of thought goes into planning and sometimes, it doesn’t even reach the point of executing that plan.

Nature toys like fallen branches and sticks become makeshift shelters to build a hut. Children practice teamwork, express themselves, communicate their ideas, learn to be helpful and cooperative, learn to share, to negotiate and to resolve conflicts.

Noted psychologist Bruno Bettelheim stated, “Play teaches the child, without his being aware of it, the habits most needed for intellectual growth, such as stick‑to‑itiveness, which is so important in all learning. Perseverance is easily acquired around enjoyable activities such as chosen play. But if it has not become a habit through what is enjoyable, it is not likely to become one through an endeavor like schoolwork.”

If a group of children is building a fort with blocks and logs, and it keeps falling, they eventually learn not to give up at the first sign of failure, but to persevere, to keep trying. This might not happen if the parent interferes in this process but allows the child to achieve their goal.

A 5 or a 6-year-old child spends much more time developing his ideas, things required and structures of play. He stays focused on a particular play theme, and it is serious business!

For example – a 6-year-old will be completely engaged with dressing the doll, combing the doll’s hair and braiding it neatly. This depth of concentration a child displays is not only astounding, but it will also help him when he is ready for academics.

Unstructured play is the child’s true reality. In this play, a child – be it 3-year-old or 7-year-old – is unknowingly learning, what we adults call, ‘decision-making’. If at home a child is given a box of blocks – how, when and whether to use blocks would be entirely the child’s own decision.

Choosing dolls over blocks, this colour drape over another, deciding to build a fort or boat – each child is moving at their own pace, discovering their own preferences, areas of interest, and ultimately engaging with that toy. Adults or caregivers are merely creating the environment for a child to flourish.

All the above-mentioned are skills necessary for the healthy development of a child, and development of skills they will need in the future. Research on the brain demonstrates that play is a scaffold for development, a vehicle for increasing neural structures and preparing them for future learning.